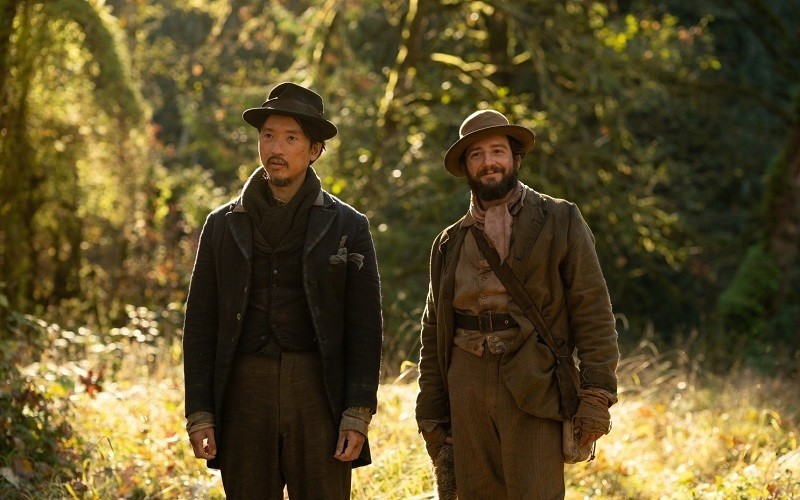 “First Cow” opens in the world of today, and a discovery both unsettling and of some archeological/sociological interest. The narrative is then borne back into the past, and eventually it dawns upon the viewer that the discovery is also a giant spoiler, and wishes it weren’t.

This kind of narrative sleight-of-hand is not customary for Kelly Reichardt, who directed “First Cow” from a script she wrote with Jonathan Raymond, adapting his novel The Half Life. But it serves well her vision of America as a land of both discovery and dread. In 1820’s Oregon, the end of the line for many frontiersmen, a Jewish cook and a Chinese man—exquisitely enacted by John Magaro and Orion Lee—renegotiate their respective statuses as outcasts by teaming up and going into a kind of business together, concocting fried dough treats that tickle the taste buds of hungry trappers. The accidental entrepreneurs optimistically aspire to move south, to San Francisco, and open a storefront business. In the meantime, they find sustenance in each other’s company, and in refining their recipes. The one hitch is their source of milk, which doesn’t belong to them.

“First Cow” is leisurely paced, letting you get to know and often to laugh with its central characters. If the opening minutes of the movie remind us that, as the blues song says, death don’t have no mercy, the end reminds us that history doesn’t either. But what’s in between shows us what trust, friendship, quick-wittedness, love and a little stolen milk can do to provide comfort amidst the harshness. (Glenn Kenny)